The Alberta Government is enhancing Film and Television Tax Credits. Our party welcomes the enacting of this policy which the Alberta Party proposed and advocated for. 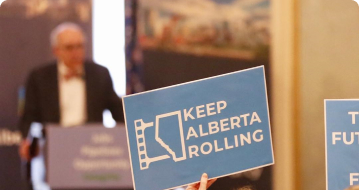 Filming in Alberta is a major component of our economy, provides well-paying employment and brings untold value in free publicity for the province. It also highlights our communities and helps Albertans have pride in where they live.

"We are happy today that the government has followed through with Alberta Party plans to grow this segment of our economy." - Acting Leader Jacquie Fenske

In Shadow Budgets starting in 2019, the Alberta Party has called for the raising and retooling of the cap on the Film and Television Tax Credit. This policy was included in the People, Economy, Jobs - The the Alberta Party's 2021 Shadow Budget. Our plan is to lift the cap from $10M per project to 65 percent on eligible salaries or 35 percent on expenses within the province.

"Film and television will play a key role in growing our economy and empowering Albertans to take control of their economic future." - Acting Leader Jacquie Fenske

The film industry in Alberta needs targeted and smart policies to ensure it is competitive against locations around the world. This is a positive step in that direction.

Below is an example of a full-width image: