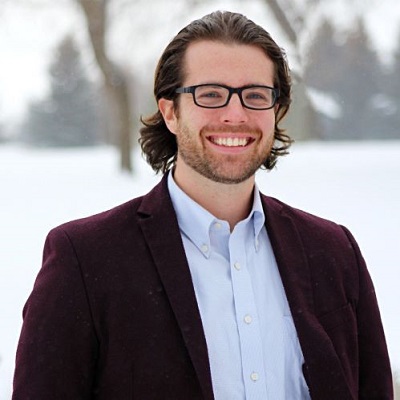 Lethbridge has been Zac Rhodenizer's home for the last 13 years. It's where he met his wife of 11 years, Sarah. It's where his two daughters Eleanor and Grace were born. It's where he studied modern languages, education, and eventually, counselling psychology at the U of L. Lethbridge and Alberta have brought Zac and his family safety, prosperity, recreation, community, education, and overall fantastic life.

Zac wants Alberta and Lethbridge to continue providing a setting in which people of all backgrounds can flourish. As a registered provisional psychologist, he is passionate about our wellness and wants to be able to influence policy in a way that will reverse the trend of our declining mental health. As a teacher and a parent, he is passionate about the education of current and future Albertans. New to politics he's hoping to provide a fresh approach that will encourage legislators to work together, regardless of party affiliation, as well as giving incentives to get elected officials to represent their constituents instead of just toeing the party line.

Politics is ultimately about presenting a vision that will unify people but instead politicians today use division to unite their "side" against the others. Zac believes that Albertans share his goal of reducing human suffering and increasing flourishing and that if we start from there, we can have a government that inspires trust, which leads to more prosperity and higher quality of life.

He believes the government should play a role in providing essential services to Albertans but also that the financial reality of the province is going to require some difficult decisions and innovative thinking. He chose to run under the Alberta Party banner because they offered a home for those like him who were not enthused with being labelled entirely "right" or "left wing". He believes that most issues are more complicated than how most parties portray them and that in ordered to better understand the nuances and consequences surrounding the issues of today we need viewpoint diversity and healthy conversations, not the endless back and forth attacking that is so common in today's Facebook politics. He found in the Alberta Party a group of open thinkers who were interested more in ideas than ideologies. He hopes to be a moderate influence that can help people across the political spectrum find a shared goal for improving lives in Alberta.

He currently works as a teacher/counsellor at Ecole Nicholas Sheran and Coalbanks Elementary School. You'll often find him jogging in the coulees, hiking in Waterton, or playing at the park or the family centre with his kids. He's an avid reader and a wannabe writer. He speaks Spanish and his French was fluent... ca fait longtemps, mais c'est comme faire du velo non?

Zac believes that constructive conversations with people of different backgrounds and beliefs are the key to increasing unity, so he's always willing to chat and hear people's ideas. He's not afraid to be wrong and welcomes opportunities to learn and improve.