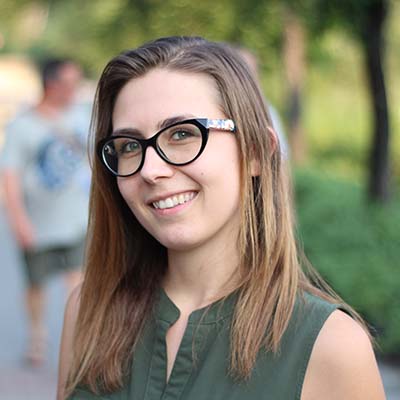 My name is Rachel Timmermans and I am running to be the MLA for Calgary-Lougheed. I am running because I want to help make politics in Alberta be about bringing people together and getting things done again, and not simply being about slamming your opponent or scoring cheap political points. After all, we are all on the same team with the same hopes and dreams.

I'm disappointed in the discourse in this province, especially that modelled by some of our MLAs and party leaders. When did it become acceptable to cyber bully our opponents? While simultaneously we're trying to tell our kids it's not ok? We see the constant blame game pointing out where previous governments or previous decisions have gone wrong. But rarely do we see an open, honest conversation about what to do next. No longer do I see the big bold dreams for the future of Alberta I grew up seeing and hearing. It seems all I hear about now is the past while waiting patiently to get a sliver of an idea as to what our future might look like.

I am tired of waiting. I’m tired of thinking someone will step in to provide a voice of clarity and vision. I’m tired of accepting things as they are and feeling like there is no hope to change them. So, instead of complaining and waiting, I’ve decided to run for MLA and help make a difference. I was born and raised in Calgary, and I’ve seen the big, bold things this province can do. I know the determined and resilient spirit carried through the many communities of Alberta. And I know Alberta’s future is a bright one, but first, we must pave the road to get there.

I am a Policy Studies student at Mount Royal University. I serve as the Vice President External of the Policy Studies Students Society. I’m passionate about politics and helping get people engaged in the policy process, as well as encouraging students to find their voice in the political realm. Often young people are made to feel like they don’t matter; a missed opportunity considering Alberta has the youngest population in Confederation.

I have also come to understand many people also feel this way in our political system. That they have no power, no say, and nothing they do will make a difference. Repeatedly, I have said anyone can make a difference, anyone can have their voice heard.

I am running to show how true this is. I have a vision for this province where we do not sacrifice either the economy or social services for the other. I believe we have the capabilities to grow both. With a lot of teamwork, hard work and listening, I believe we can create the Alberta we all know we can be.