If you have been following this session of the legislature, you know that the Alberta Party Caucus has been punching above its weight on the issues that matter to Albertans.

Our caucus worked hard to hold the government to account on why performance measures continue to slide in healthcare, despite record levels of spending.

We were the first to propose production cuts to address the growing price differential for our energy products, and this week continued to lead the charge demanding the government take action.

Our caucus knows that Albertans want solutions instead of constant bickering, and we will continue to lead the way in pressing for solutions.

November 28, 2018 (Edmonton) – Eleven days after MLA and Alberta Party Energy Critic Greg Clark first called for mandatory production cuts in Alberta’s oil sector, more and more people are coming to a consensus that it is the right option.

“I was certainly pleased to see the leader of the official opposition join our caucus in calling for mandatory production cuts” said MLA Clark.

“I wish that the urgency of the situation had been clear to other opposition parties when I first called for cuts, but now that they have come around I hope our combined call for action will get through to the government.”

“We need action as soon as possible, before any more damage is done to our economy.”

Greg Clark and the rest of the Alberta Party Caucus will continue to lead the way in the legislature and deliver value for Albertans.

Collusion? You be the judge...

Last night, the NDP and UCP colluded to prevent the opportunity to debate on the composition of legislature committees. The committees that oversee budgets for independent MLAs and smaller parties should have diverse representation and they are blocking that from happening.

In a representative democracy, it’s important that all elected representatives have the opportunity to be at the table, and it is fundamentally wrong to silence the voices of the citizens we represent.

Alberta Party Calls for Action in Oil and Gas Crisis

November has turned out to be an ugly and difficult month for our struggling oil and gas sector. Because of a massive price differential, we're only getting approximately 20 cents on the dollar for our oil.  Our precious oil is now the cheapest in the world. This means that Alberta and Canada is losing out on billions in potential royalties.

It’s a national crisis and our Alberta Party caucus is calling on the government to reduce production until prices recover. “Desperate times call for desperate measures,” Alberta Party MLA Greg Clark  told 660 NEWS earlier this week. “We are literally giving away our most valuable natural resource for free, I think it’s time for the provincial government to consider curtailing production for at least a short period of time, to increase prices and keep Albertans working.”

Our party is also questioning why the NDP government seems to be studying this crisis to death by striking yet another panel (including appointing NDP loyalist Brian Topp) instead of acting today.

The newest member of #teamalbertparty is Alex Luterbach. The Airdrie resident is a small business owner, early childhood educator and holds a university degree in psychology. She will be carrying the Alberta Party banner in Airdrie-East. Welcome to the team, Alex! 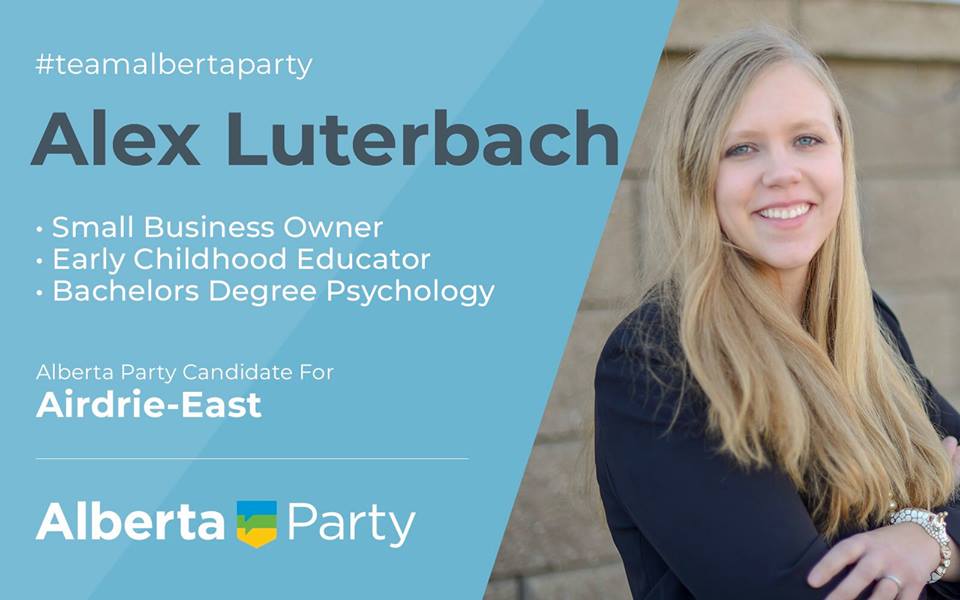