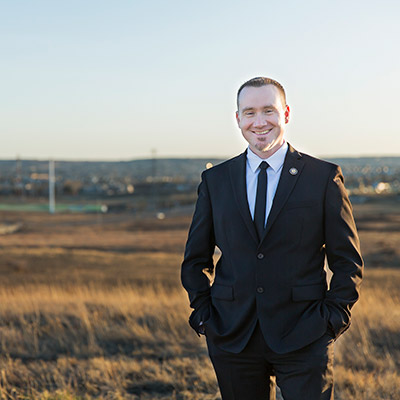 Nate Pike has a long history of contributing to whatever community he is a part of.

Growing up in Northern Alberta before moving to Calgary at age 11, Nate has a long history of community engagement and has volunteered thousands of hours to a variety of causes. Whether it’s helping to raise funds for the Calgary Women’s Emergency Shelter or volunteering his time to support and help bring attention to a wide range of community issues, Nate is a passionate and tireless advocate.

Nates work ethic and commitment to advocacy stem from not only his upbringing, but also the time he spent living in the downtown core and seeing the effects that socio-economic status, substance abuse, mental health issues and disability can have on a persons ability to succeed.

In 2008, after working as a middle manager in telecommunications, Nate decided to change his career path and began to pursue training and work as a paramedic. After working in rural Alberta for a few years, Nate began working in Calgary in 2011 and has worked as an Advanced Care Paramedic serving the people of Calgary ever since.

In addition to his role as a Paramedic, Nate has had unique opportunities to work with several EMS specialty teams. In his role with the Calgary Police Service Public Safety Unit, Nate was one of the initial first responders to evacuate people during the 2013 floods in Calgary. His work with the Peer Support Team took him to the front lines of the 2016 Fort MacMurray Wildfires providing mental health support for other first responders. Furthermore, Nate is honoured to serve the Siksika Nation working for Siksika EMS on a casual basis. Finally, Nate sits on the board of directors of the EMS foundation, helping to find innovative ways to support first responders in Alberta and maintain the proud history of paramedicine in our province.

Nate has also taken his passion for the work first responders do to the next generation of Paramedics by instructing at SAIT for the last 8 years. Nate played a pivotal role in establishing the Alberta Party in Calgary North East and is looking forward to the opportunity to represent the party in his home constituency.

Nate has made his home in Coventry with his wife Nikki for almost a decade where they are raising their two sons.

In his spare time, Nate enjoys spending time with his family, playing and recording original music and studying world history.